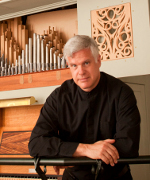 David Arcus is Chapel Organist and Associate University Organist at Duke University, where he participates in nearly 200 services and events annually. He holds degrees from the Oberlin Conservatory of Music and the School of Music at Yale University, where he earned his Doctor of Musical Arts degree. He has received awards in composition and improvisation competitions, and he is in demand as a solo recitalist, having performed throughout the United States, Europe, and Great Britain. He has also toured with the Duke Chapel Choir in Great Britain, Poland, The Czech Republic, Spain, Greece, Turkey, and China, and he has appeared as organist with the North Carolina Symphony Orchestra. He has served on the faculties of St. Mary’s School, Duke University, and the University of North Carolina at Chapel Hill.

Dr. Arcus’s recitals have included premieres of new works by well known composers such as Aaron Jay Kernis and Dan Locklair. He is frequently commissioned to write new works for organ and choir, and he is also active as clinician, teacher/lecturer, and conductor. In the summer of 2013 he will serve as Course Organist for the Royal School of Church Music Carolinas Course and present a workshop on improvisation at the Southeast Regional Convention of the American Guild of Organists. His compositions are published by Concordia, Hinshaw, and Wayne Leupold Editions. His CD, The Organs of Duke Chapel, is on the Gothic label.